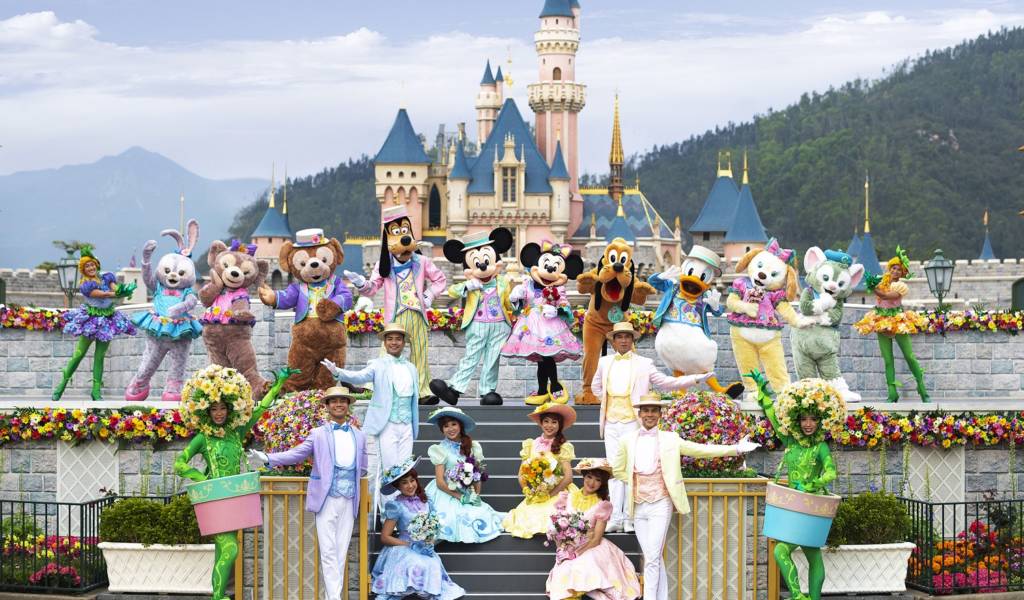 Travelling with kids is not an easy thing. They will trouble you, ask for things and most of all, they will be restless until they get back home. But in Hong Kong this won’t be much of a problem because the city is filled with enjoyable kid-friendly attractions and to make your selections easier, I have made a list of 6 such places in Hong Kong for you to choose from! Let’s fly to Hong Kong with Cathay Pacific now!

Not only the kids but you too, even though you are grownups will love Disneyland Hong Kong. It is a theme park located inside the Hong Kong Disneyland Resort in the Penny’s Bay of Lantau Island. Most of the songs on theme park rides are sung in English. The guide maps and the instructions, however, are available in traditional Chinese, simplified Chinese Cantonese, English, and Mandarin. Hong Kong Disneyland has been themed with nine areas- Main Street, U.S.A., Fantasyland, Adventureland, Tomorrowland, Grizzly Gulch, Mystic Point, Toy Story Land, Arendelle and Stark Expo. The Main Street, U.S.A. is designed very similar to that of its original street, except everything here is made of wood unlike the other stone made Main Streets in Disneyland all over the world. The Adventureland features the all-time favorite show; “Festival of the Lion King” and the Fantasyland brings life to Sleeping Beauty’s castle, Dumbo the Flying Elephant, Winnie the Pooh and so on. The Tomorrowland lets you have the glimpse of the future with the iconic Iron Man Experience. Toy Story Land features shows with the Toy Story characters, the Grizzly Gulch was designed as a mining town and the Mystic Point is home to all this supernatural along with its Mystic Manor. The newest additions- Arendelle: The World of Frozen (to be opened in 2021) and Stark Expo: The World of Marvel Superheroes (to be opened in 2023) are also expected to be super amazing as the rest of the themed areas. And if you are enjoying as much as your kids, go ahead with the fun as no one judges you in this type of theme park.

Ocean Park, Hong Kong is an oceanarium and an animal theme park located on the south side of Hong Kong. Most people prefer to be here rather than Hong Kong Disneyland because of the long queues and crowds but you can visit both of these places with your kids. Ocean Park Hong Kong is separated into two areas by a mountain as the Summit (Headland) and The Waterfront (Lowland). These two areas can be reached by the Ocean Express railway of a cable car system, and if you take this you are sure to be met with the breathtaking views of Hong Kong from above. The Waterfront near the entrance is subdivided into Marine World (with the sea lion habitat), Thrill Mountain (with different kinds of rides), Polar Adventure (with animals like king penguins, gentoo penguins, pacific walruses, spotted seals, snowy owls and Arctic foxes) and the Rainforest (with animals like the green anaconda). The Summit area is more suitable for older kids and is subdivided into Aqua City, Amazing Asian Animals and the Whiskers Harbour. Aqua city is home to over 400 species of fish with the largest viewing dome in the world. Amazing Asian Animals provides a home to giant Pandas and for endangered animals like Chinese giant salamanders. Whiskers Harbour, formerly known as the Kid’s World has various activities for your kids like riding a hot air balloon-themed Ferris wheel, Frog Hopper, a train through a tiny forest and a merry-go-round with fairy-tale inspired horses. However, you should remember to buy the tickets in advance if you are visiting Ocean Park in the high season.

Noah’s Ark is the first Christian biblical themed tourist attraction in China located on Ma Wan Island in Hong Kong. This park contains a replica of the full-sized simulation of Noah’s Ark; you can also see the life-sized sculptures of 67 animal pairs that were described in the bible. The tour begins with an introduction to Judeo-Christian teaching from the time of Moses. It also includes exhibits that showcase the challenges that humans face in the modern world. The tour ends with the history of the Bible and therefore, your kid can learn a lot about Christianity. But the most interesting fact is that the ark has a hotel on the top floor where you can book a stay in Hong Kong. The park also has a part called the nature garden along with a beautiful greenery landscape and well-paved paths to walk in with your kids. And as you walk you can see animals, mostly reptiles in display at the nature garden. Apart from that, there is a tower known as the Solar Tower where your kids can learn about the sun and the solar system. The tours are real-time as the sun’s surface activities are observed through one of the largest professional vacuum solar telescopes in South East Asia!

The Hong Kong Space Museum is a must-visit museum in Hong Kong if you have a kid who is in love with outer space! The building is notable for its hemispherical shape, which also is responsible for its nickname the ‘pineapple bun’. It houses the only planetarium in Hong Kong. However, it is divided into two parts; the east and the west wing. The east wing has the nucleus of the space museum’s planetarium and the egg-shaped dome with the Ho Space Theatre, the Hall of Space Science, workshops and offices of the museum beneath it. The sky gallery of the Space Museum projects up to 8,000 stars onto the hemisphere screen of the Planetarium through optical stimulation. The west wing has the Hall of Astronomy, the Lecture Hall and a small gift shop.

Hong Kong Heritage Museum is a museum that displays the history, art and cultural aspects of Hong Kong. There are permanent exhibition galleries, some of which are Cantonese Opera Heritage Hall, T.T.Tsui Gallery of Chinese Art and Jin Yong Gallery Gallery. The museum also houses a 350-seat theatre for various performing arts like the iconic Cantonese opera performance. So, if you think that visiting this museum will bore your kids, no because there is a gallery specifically designed for kids inside named the Children’s Discovery Gallery. The Children’s Discovery Gallery is more suited for kids that are 4-8 of age. There are eight play zones in the gallery. The kids can do some exploring in Mai Po Marshes at the nature section, do some digging in the archaeology section while discovering the artifacts by themselves and learn the old stories at the history section. They can also know more about the sea creatures, birds and other animals. Also, they will have a chance to experience the way of traditional life in Hong Kong in the New Territories village. There are exhibitions as well, one such exhibition being the Hong Kong Toy Story exhibition which displays how the local toys are developed.

Speaking of which, the Big Buddha or the Tian Tan Buddha as the locals call it is a giant bronze statue of Lord Buddha built on 29th December 1993, the day of enlightenment of the Lord Buddha according to the Chinese calendar. It stands at a height of 34 meters and was constructed using over 200 bronze pieces. The right-hand gesture of the Buddha statue displays the eradication of suffering and the left-hand gesture displays an act of generosity. The statue displays the relationship between nature, religion, humans and faith. There are six small bronze statues surrounding the Big Buddha statue. These statues are known as “The Offering of the Six Devas” and the statues appear to be offering flowers, fruit, incense, ointment, lamp and music to the Buddha statue. The Big Buddha can be reached by a moderately challenging but a worthy climb of 268 steps.

Po Lin Monastery, on the other hand, is a Buddhist monastery that was founded in 1906 by three monks visiting this place from Jiangsu Province in China. It is famous for making wooden bracelets. These bracelets can be bought near the Big Buddha statue. The main temple contains bronze statues of Lord Buddha depicting his past, present and future lives.